In previous lessons students have learned to use a number of abstractions in their programs, including the velocity properties, isTouching, and collisions. These abstractions have allowed them to build much more complex programs while ignoring the details of how that behavior is created. In this lesson students learn to build abstractions of their own by creating functions.

Students will primarily use functions to break code into logical chunks that are easier to reason about. This foreshadows the chapter's transition from building technical skill to the organizational processes used to develop software.

Attention, teachers! If you are teaching virtually or in a socially-distanced classroom, please see these modifications for Unit 3.

As students share their ideas, make sure they have a clear idea of the code that they would use to make the block, reminding them that all of the blocks they have learned this chapter (e.g. velocity, collisions) have been built from blocks that they already knew.

Prompt: What's one block you'd like to have in Game Lab? What would it do? What code would it use to work?

Think-Pair-Share: Allow students to explain their blocks to a partner before sharing out their ideas.

Today, we're going to learn how to create our own blocks so that we decide exactly how they will work. These special blocks are called functions, and they are one of the most powerful parts of programming.

Transition: Move students into Code Studio where they will learn to create and call functions.

Goal: Use this first prompt to review what students learned today. When they create a function they are creating their own block that they can call or use whenever they like. They saw at least two primary motivations for creating functions today including:

Students should review the definition of abstraction as "a simple way of representing something complex". Note that a function is an abstraction because it allows you to create one simple name for a more complex block of code.

Prompt: Why would we say that functions allow us to "create our own blocks?" Why is this something we'd want to do? Why would a function count as an abstraction?

Discuss: Have students discuss at their table before talking as a class.

Functions are a useful tool for helping us write and organize more complex pieces of code. As we start looking to the end of the unit and your final project, being able to keep your code organized will be an important skill.

In these first several lessons students are just being shown the syntax of functions and are not asked to write or create their own. It can be useful to explain creating a function as basically “creating a new block” just like another programmer created the “isTouching” or “velocity” blocks that they’ve seen actually contain other more complex code.

Functions let you build your own blocks and decide what code goes inside of them. This program has already created two functions, but only one of them is being called.

This program has already created 4 functions that draw parts of a scene. Unfortunately it's not coming out right.

Does It Matter Where You Create Functions?

So far all your functions have been created at the bottom of your code. What do you think will happen if you call a function before it's defined?

The red square will be drawn but the green one will not. You cannot call functions after they are created.

The green square will be drawn but the red one will not You cannot call functions before they are created.

Both squares will be drawn. You can create functions anywhere you like in your code.

Neither square will be drawn. There is an error in the code.

Practice using functions and learn more about what makes them so useful. 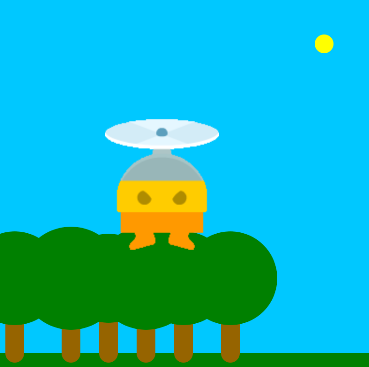 a
Calling Functions in the Draw Loop

Call the function to draw the background in the draw loop.

Make the flyer reappear on the right side when it goes off the left.

Change the setFlyer() function so that the flyer appears at a random y with random velocity. 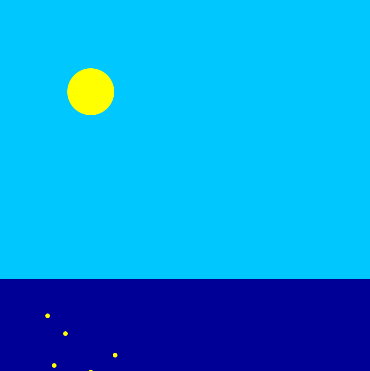 Add code to the drawNight() function to create a night scene.

Calling Functions in the Draw Loop

You can call a function inside the draw loop, just as you would anywhere else in your code.

This and the next two levels introduce three uses of functions, namely removing repetition in programs, allowing code to quickly be changed at multiple points, and providing organization in code. Students will need to write more of their own functions in these levels.

You'll often want to use the same code at many places in your program. Once you've created a function you can call it as many times as you like.

A nice benefit of using functions to remove repeated code is that you can now easily make changes to multiple places in your code. Just change how you create the functions, and your program will now use the new code everywhere your function is called.

Make changes to the setFlyer function so that the flyer starts at a random Y location between 0 and 400, and moves at a random velocity every time it is reset.

In Game Lab all the action is happening in the draw loop, but too much complex code makes it really confusing to read. To keep your draw loop easy to read, use functions for larger chunks of code. You can call them inside the draw loop and define them below. This is a really good example of using abstraction to think about problems at a high level and worry about details later.

This program should draw a daytime scene or a nighttime scene, depending on the location of the mouse. The draw loop describes what needs to happen but one of the functions hasn't been written yet.

What are three ways that functions can be useful when you are writing programs?

Hint: Go back to the practice levels for review if you are not sure.

In this and the next two lessons, students will use functions to organize code within a simple game. While it is not identical to the side scroller, many of the skills and uses of functions in these levels can and should be used when they complete their side scroller.

Write Your Own Function

Time to practice writing functions of your own. This is a very simple game in which coins fall from the sky and the bunny tries to catch them. All you need to do is write the function that sets up the coin.

Catch the Coin, Increase the Score

Let's make that score change now, too, to complete the game. You'll need to be able to tell when the bunny is touching the coin and then reset it.

Define and call functions to organize code and make it easier to reuse.

Change the Background with the Score

Once you've caught 10 coins it's time to celebrate. You should change the background to be something fun.

Improve your game and try out these challenges with functions.

a
Creating Functions to Draw Scenes

The provided code draws one of two different scenes based on where the mouse is on the screen. It either calls the drawScene1() function or the drawScene2() function. However, these functions don't exist yet!

Use what you've learned to create whatever you like. When you're finished, you can click to send your creation to a friend, or to send it to your Projects Gallery.