Question of the Day: How can programming languages hide complicated patterns so that it is easier to program?

After a brief review of how they used the counter pattern to move sprites in previous lessons, students are introduced to the idea of hiding those patterns in a single block. Students then head to Code Studio to try out new blocks that set a sprite's velocity directly, and look at various ways that they are able to code more complex behaviors in their sprites.

This lesson launches a major theme of the chapter: that complex behavior can be represented in simpler ways to make it easier to write and reason about code.

In this lesson students are taught to use the velocity blocks to simplify the code for moving a sprite across the screen. This marks a shift in how new blocks are introduced. Whereas previously blocks were presented as enabling completely new behaviors, they are now presented as simplifying code students could have written with the blocks previously available. Over the next several lessons, students will see how this method of managing complexity allows them to produce more interesting sprite behaviors.

Attention, teachers! If you are teaching virtually or in a socially-distanced classroom, please see these modifications for Unit 3.

Demonstrate: Ask for a volunteer to come to the front of the class and act as your "sprite". Say that you will be giving directions to the sprite as though you're a Game Lab program.

When your student is ready, face them so that they have some space in front of them and ask them to "Move forward by 1". They should take one step forward. Then repeat the command several times, each time waiting for the student to move forward by 1 step. You should aim for the repetitiveness of these instructions to be clear. After your student has completed this activity, have them come back to where they started. This time repeat the demonstration but asking the student to "Move forward by 2" and have the student take 2 steps each time. Once the student has done this multiple times ask the class to give them a round of applause and invite them back to their seat.

Prompt: I was just giving instructions to my "sprite", but they seemed to get pretty repetitive. How could I have simplified my instructions?

Goal: The earlier demonstration should have reinforced the fact that repeatedly giving the same instruction is something you would never do in real life. You would instead come up with a way to capture that the instruction should be repeated, like "keep moving forward by 1."

Discuss: Give students a minute to write down thoughts before inviting them to share with a neighbor. Then have the class share their thoughts. You may wish to write their ideas on the board.

Programming languages also have ways to simplify things for us. Today, we're going to look at some blocks in Game Lab that hide complicated coding patterns to make things easier for programmers.

Question of the Day: How can programming languages hide complicated patterns so that it is easier to program?

One way to simplify these instructions is to just tell our "sprite" to keep moving by 1 or 2, or however many steps we want. As humans, this would make instructions easier to understand, and as we're about to see there's a similar way to make our code simpler as well.

Circulate: These levels introduce the velocityX, velocityY, and rotationSpeed properties that you just discussed with students. Check in with students to see how they are doing and keep track of when everyone has made it to the end of level 10.

As students describe the blocks that they would make, ensure that they are relating the specific code that a block would use to the higher-level concept of what it would do. For example, a "velocity" block would move a sprite across the screen, and it would include blocks that use the counter pattern on a position property.

Students should describe the advantages of having these blocks, such as not needing to re-write the code all the time, or making it easier to read what the program is doing.

Prompt: You learned a few new blocks today. At first glance, these blocks did the same sorts of things we'd already done with the counter pattern, but made it simpler for us to do them. As you went through the puzzles, though, you started doing some interesting movements that we hadn't been able to do before.

All of the movements that we did today are possible without the new blocks, but it would be very complicated to code them. One of the benefits of blocks like velocity is that when we don't have to worry about the details of simple movements and actions, we can use that extra brainpower to solve more complicated problems. As you build up your side scroller game, we'll keep looking at new blocks that make things simpler, so we can build more and more complicated games.

One way to move sprites in Game Lab is with the counter pattern. For example sprite1.x = sprite1.x + 1 moves a sprite by 1 pixel each frame of the draw loop. This pattern is so common that sprites have a velocityX property that does this for you.

As students give you examples, try to elicit answers that use both positive and negative numbers, and that use the x and y positions as well as sprite rotation.

Here is a feather sprite that should be floating down the screen. If velocityX makes a sprite move to the right, can you find the block that will make the feather move down?

Find the block that will make the feather sprite go down the screen, and use it outside the draw loop.   ( Show me where )

Make the sun rotate by 3 degrees each time using the rotationSpeed block. ( Show me where )

Inside versus outside the draw loop

There may be some confusion that the new blocks are animation (changing position) and yet have gone outside the draw loop up until this point. That is because up until this point, the velocity has been set at the beginning of the program and not changed. When students want the velocity to change during the program, it will need to go inside the draw loop.

One advantage to using the velocity blocks inside conditionals (if blocks) is that your sprite keeps moving, even after the condition stops being true. For example, you only had to press a key once to start the color wheel spinning, and it kept spinning forever. The code below uses if statements to make a fish sprite move in different directions.

Practice using the velocity blocks with these activities. 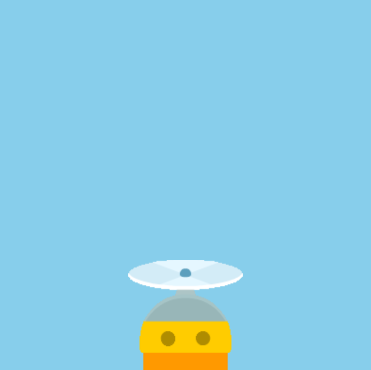 Make the robot fly once the space bar has been pressed at least once.

Dip the paint brush in the paint.

Dip the paintbrush in the paint.

Use conditionals to control the flow of a program; model two dimensional movement on a coordinate plane.

The code below should make the fish start moving right as soon as you press "Run". Using conditional statements and the .velocity block, you can make it continually swim back and forth.

Try out these new blocks and challenges with velocity.


Choose from the following activities:
a
Changing Course

Study the animation to the right. Notice that the purple alien sprite changes between x and y velocities when it is near each corner of the screen.

Be careful! If the sprite starts moving diagonally, it might mean it has both an x and y velocity. In the first corner the alien needs to stop moving up and start moving right.

Use what you've learned to create whatever you like. When you're finished, you can click to send your creation to a friend, or to send it to your Projects Gallery.