Lesson 9: The Need for Addressing

In this lesson, students explore more deeply how communication between multiple computers can work over the Internet. They do this by playing a simplified game of Battleship, in which the first game is played unplugged, in their table groups, and the second game is played using the Internet Simulator, so that multiple students can connect to each other and see each other’s messages. Students must devise a messaging protocol that makes it clear who is sending the message and who the intended recipient is.

Students then devise a binary protocol for playing this game which will entail developing an addressing system for players, as a well as a formal packet structure for transmitting data about the state of the game.

NOTE: this is a large lesson that will likely need to span 2 days of class.

This lesson builds up to students learning about the “Internet Protocol” addressing system, commonly known as IP Addresses.

Up to this point in the course, the Internet Simulator has only assumed point-to-point communication. The "protocols" students were inventing mostly had to do with encoding information in binary, rather than also encoding communication information required for successful delivery of the message.

The lesson mimics a real problem that designers of the internet had to solve. Many computers are connected together by networks. So if a computer sends some bits out, those bits pass through many computers. How does a computer know who those bits are for? If a response is necessary, how does it send it back? This is a complicated question, but the first part of the answer is that you need an addressing system, and some kind of fixed structure for messages that everyone agrees on (a protocol) so messages can be interpreted properly. (We'll get to routing later).

The Internet Simulator for this lesson is setup to “broadcast” every message to every person in the group. Since everyone receives any bits that were sent by anyone else, a method for identifying the intended sender and receiver of the message is needed. Students will invent a protocol for addressing messages.

Many network systems, such as local ethernet and WiFi, rely on addressing schemes to make sure bits are received by the correct computer based on address and for other computers to simply ignore messages not intended for them.

How to demonstrate the rules of Battleship

Not every student may have played Battleship before and even if they have, this mini-version of the game is different from the real thing. You should consider how you want students to learn the new rules and play with pencil and paper rather than the typical peg board. In the resources above there is a printable copy of the Broadcast Battleship Rules - Activity Guide, but there are alternatives to simply distributing those rules.

So far we have only solved Internet problems when you are connected to one other person (so-called "point-to-point" communication). Obviously, the Internet is bigger than that, and today we're going to look at problems that involve multiple people.

Teachers may want to substitute other games for battleship in this activity for a variety of reasons. However, if you do that be aware that battleship was chosen because it has several properties that force concepts of internet protocols to come out. Battleship has a relatively fixed size message length, a need to encode several different pieces of information (coordinates), to and from addressing, and a verification message (hit or miss). 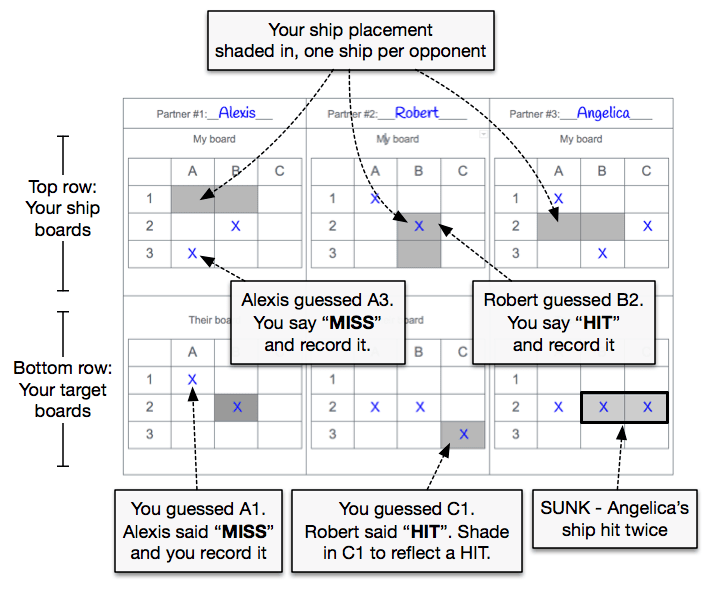 The first time students visit Code Studio for this lesson a tutorial video will pop up to shows how this works.

You may want to do one of the following:

Highlight the differences in the new version:

Continue the game on the Internet Simulator

Some methods may be more informal, or buried in content of the message:

At this point, playing the game is less important than moving towards developing a clear and efficient protocol.

Students might notice that a concise protocol makes it harder for them as humans to play the game, but remind them that they are the computers in this activity.

Why would it be important to keep the message short and standardized? Make a connection to the protocols from previous lessons: Sending Numbers and Sending Text.

After the 5-10 minutes allow groups to talk. They should discuss standardizing their protocol for sending messages. They should consider:

After groups have had a chance to coordinate and refine their protocols, give them a chance to try it out on a fresh game.

After 5 minutes or enough time to try out their new protocol, transition to the next activity.

If students are having difficult getting started:

Here a few other prompts you can use

(From the Activity Guide)

Previously you came up with a method for exchanging messages on an open broadcast channel to play multiple games of Battleship at once. Now that you’ve played Battleship this way, with your group or with a partner, describe an efficient binary protocol for playing a 3-person game of Battleship that can be played accurately over the Internet Simulator.

Let “efficient” mean that your protocol uses the smallest reasonable number of bits (0s and 1s) to make messages for Battleship that still contain all of the necessary information for playing the game.

Give groups about 10 minutes to work

A good solution uses a numeric address (not tied to a person’s name) and a fixed length message. The number allows you to uniquely identify players (like a phone number) and having a fixed length helps know where each "chunk" of the message starts and ends.

How many bits do you need for addresses? -- For 3-person Battleship, you only need 2 bits for an address, since there are only 3 people; each can have a unique code.

How many bits are needed for the total message? -- Answers to this will vary and creativity should be encouraged. However, it should be evident from the students’ protocols that they recognize the fundamental elements of the game and what might be able to be compressed into only a few bits.

After groups have had some time to work bring the class together.

After the group has presented open up the discussion to draw out similarities and differences. Here are a few prompts:

Use this question to transition to the wrap-up:

What do you think all of this has to do with the Internet?

You may choose to share this with your students or not. You might just use this exemplar as background knowledge to help you guide students' solutions.

A simple, but clever encoding protocol is to recognize that the addresses, coordinates, and hit/miss messages can each be encoded with 2 bits (i.e. a list of 5 numbers in the range 0-3), and that you can make a combined message protocol that would allow a player to communicate anything needed for the game.

The scheme shown below uses 10 bits total. The last two bits are interesting: they indicate whether this is a shot being fired for the given row and column or whether it’s a hit/miss response to the given row and column. Since the respondent who says hit or miss must verify the coordinates of the shot they are responding to, the recipient doesn’t have to remember the last shot they called. 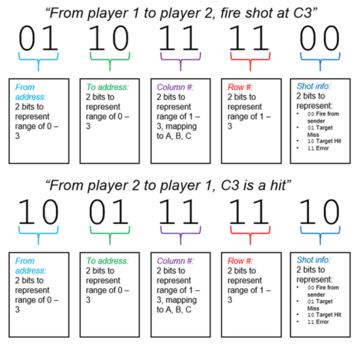 Do some rapid research (Optional)

At this point, you could have students look up the real IP packet structure and it might make some sense to them. They might find it satisfying and empowering to be able to understand a more technical article. The Wikipedia article on IPv4 packets shows how all the bits are laid out: https://en.wikipedia.org/wiki/IPv4#Packet_structure

However, we have not yet covered a major aspect of packets, and the real need for their existence, which is that they are used to breakdown very large messages into smaller chunks to improve reliability of transmission. We cover packets in a future lesson.

You should review the material covered in the video.

Code Studio: Assessment questions are available on the Code Studio

Security and Privacy: If the messaging scheme your group designed was really used on the Internet, what could go wrong in terms of security and privacy? Think about what a malicious person could do. What if the messages sent weren't about a game but about something more personal like a conversation with a friend, or communicating with a bank? * There are two major security problems with the current version: * Anyone can fake a return address. Bob could send you a message and claim it’s “from Alice,” and you’d have no way to confirm who sent it. * Everyone can view everyone else’s messages! Because all messages are “broadcast” over Internet Simulator, messages have no expectation of privacy.

Look Up Your IP Address: What's the IP address of the computer you're using right now?

There are a number of ways to figure out your IP address. An exploratory way is to do a web search for: *"What's my IP address?"

That will lead to finding something, but you should be cautioned that the answer isn't always simple.

You can also look at a computer's settings to see what it thinks it's IP address is.

How did your group decide upon a system for sending messages in the Battleship simulator?

Were there disagreements or problems? How were they resolved?

Even with a good protocol, what are some privacy and security challenges while playing battleship on the Internet Simulator?