Students will explore the properties of number systems by effectively inventing a base-3 number system using circles, triangles and squares as the symbols instead of arabic numerals. Students are asked to create rules that explain how each arrangement of symbols can be generated or predicated as an orderly, logical series. The objective is to understand that you can represent any number with any agreed-upon set of symbols that appear in an agreed-upon order. This is as true for circles, triangle and squares as it is for the digits 0-9, or the number systems we commonly see in computer science (binary and hexadecimal).

In computer science it’s common to move between different representations of numbers. Typically we see numbers represented in decimal (base-10), binary (base-2), and hexadecimal (base-16). The symbols of the decimal (base-10) number system - 0 1 2 3 4 5 6 7 8 9 - are so familiar that it can be challenging to mentally separate the written symbols from the abstract values they represent. As a result, using the digits 0 and 1 can be a distraction when learning binary initially, so we don't in this lesson.

We want to expose the fact that numbers themselves (quantities) are laws of nature, but the symbols we use to represent numbers are an arbitrary, man-made abstraction. Sometimes students memorize conversions from one number system to another without really understanding why. By effectively inventing their own base-3 number system in this lesson the goal is for students to see that all number systems have similar properties and function the same way. As long as you have 1) a set of distinct symbols 2) an agreement about how those symbols should be ordered, then you can represent any number with them.

How many ways can you represent "7"?

This discussion aims to prepare students to distinguish between the familiar symbols we use to represent numbers and the quantities we are actually representing.

"How many different ways can you represent the quantity “7”? Take one minute to write your ideas down before sharing with your neighbors."

In the previous lessons you all invented ways to represent a set of messages with bits. Today we will focus on representing numbers. By the end of class, you will have invented your own number system.

The purpose of using these three symbols (as opposed to digits or letters of the alphabet) is to ensure that the activity becomes a more true problem-solving exercise or puzzle. The shapes are enough in most cases to jolt students out of the context of math class and truly invent a number system of their own without realizing it at first.

Even though students might not come up with systems that we would think of as "common", creativity should be encouraged. It's possible to invent all kinds of rules to get from one pattern to the next.

The point is that number systems are man-made sets of symbols and rules.

There are two major "beats" to this activity:

Students should discover a total of 27 unique patterns.

When students record all of the patterns that they come up with on paper and number them it foreshadows assigning a numeric value to a distict set of symbols.

You may need to emphasize that the goal of the activity is not merely to list all 27 patterns, but to develop a set of rules that could be followed to generate all of them.

Some students might quickly recognize that there are 27 distinct groupings. However, ordering them is frequently a challenge for students because outside the context of math class they might not immediately apply what they already know about number systems, especially place values.

Nevertheless, creativity should be encouraged. It's possible to invent all kinds of rules to get from one pattern to the next.

Good questions to direct students towards thinking in this way include:

Given 3 places to work with, make as many unique patterns as you can using only circles, triangles and squares.

The diagram on the right shows a few examples of some 3-place patterns. NOTE: Order matters -- so, for example: Circle-Triangle-Square is a different pattern than Square-Circle-Triangle, even though both have one of each possible shape.

Challenge 1 - Find all of the 3-place patterns

Challenge 2 - make a system for generating all the patterns

Now that you’ve listed out all of the 3-place patterns of circles, triangles, and squares, let’s put them in a systematic order. You can use any system you like, as long as you create and follow a clear set of rules for getting from one line to the next.

Give students a fair amount of time to get into groups and start to arrange the shapes. They should be trying to discover patterns and rules in an effort to find all the possible unique configurations.

Students will need to do three things:

Take a look at the next lesson on binary numbers to guage how deeply you need to go into number systems for this wrap up. You might be able to blend the end of this lesson with the beginning of the next more seamlessly. 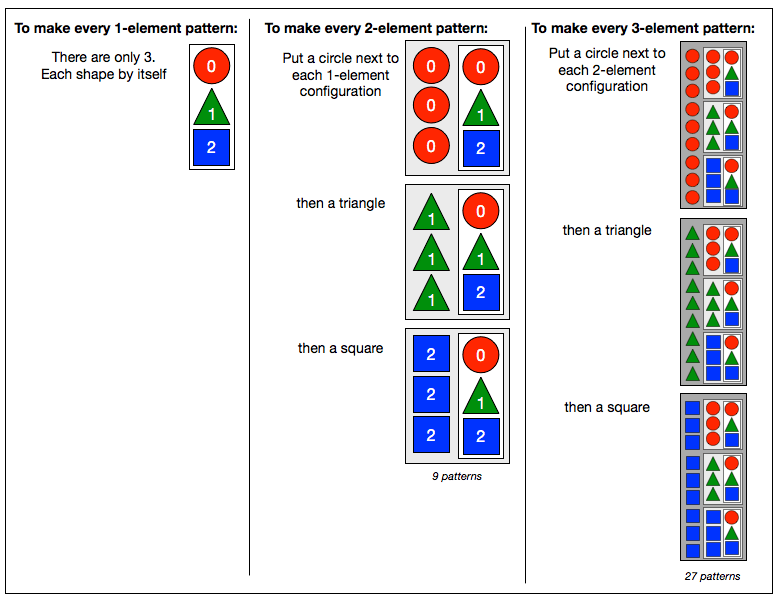 The diagram on the right (click to expand) shows a technique for generating all the unique patterns with 3 shapes. The strategy mimics how we typically count in most number systems. Then, instead of shapes, if you just say circle = 0, triangle = 1, and square = 2 you can see how you might represent any pattern with 3 digits.

Use a share out activity to allow students to share their systems with their classmates. Either in groups or as a class, students should read through their classmates’ rules, assess whether they are clear, and test them out to see how they are similar to or differ from their own rules and the patterns they generate.

You just made a number system!

If you have good rule for generating all the patterns, and for getting from one pattern to the next, and you have numbered each pattern so you have a symbol-to-number mapping, you have the beginnings of a number system!

Recall: how many different ways you could write the number 7? Well, you now have another way using a system you just made up.

The goal of this final discussion is to establish the general properties of all number systems. You can raise the idea that the systems students developed might be just as legitimate as the ones they use every day - just not commonly accepted. The only requirements for developing a number system are:

Discuss the Rules Created for the Number Systems

At the end of the lesson a connection to number systems in general can be made and binary numbers in particular.

For example, after demonstrating a rule for the circle, triangle, square number system you could ask:

If it would be useful, you might show the Binary Odometer - Code Studio widget that appears in the next lesson.

By the end of this lesson students do NOT need to know the binary number system or be able to convert between decimal and binary. We will address binary numbers in the next lesson much more specifically, including the idea of place value. Only a general understanding of the concept of number systems must be established.

Code Studio: Assessment questions are available on the Code Studio

Peer-assessment: For a student peer-assessment, give students note cards or blank sheets of paper and direct them to write the first few permutations of their system on it. They will then trade their papers with another group, and see if the other group is able to predict the next two permutations in the system.

In 50 words or less, describe the concept of a number system.

Why are rules required for a number system to be useful?