In this lesson students explore the benefits (and potential security concerns) associated with routing traffic across the Internet. Building on their introduction to IP addresses in the previous lesson, students use a version of the Internet Simulator that allows messages to be sent only to an intended recipient, as indicated by the IP address. The Internet Simulator also allows students to examine the traffic that goes through all of the (simulated) routers on the network. They will discover that messages go through many different routers, may not always take the same path to reach the final destination, and that the routers (and their owners) can see all of this traffic!

The main purpose here is to use the Internet Simulator to dive into examining the network traffic that's generated by students in the class. Seeing traffic like this in real life is very hard if not impossible since only engineers of large networks have access to router data on a large scale, and it's also more complicated to understand. While our network is simulated and provides a simple view, the basics are the same, and quick investigations reveal interesting things. We want students to simply get a taste for both the scale and the implications of what routers do.

CS Background: A router is a computer designed to receive and redirect packets of information based upon the addressing information (e.g. an IP address) contained in the packet. Routers will either deliver a packet to its final destination or forward it to one of several other routers it is connected to. By monitoring current network conditions, a router can determine which of these will allow the packet to reach its destination fastest. There will often be redundant paths between two locations on the Internet, and so if one path is experiencing traffic or otherwise out of service, additional paths will be available. This redundancy makes the Internet more reliable and also helps the Internet to scale, accommodating new users (and routers!) as they are connected to the system.

Goal: Prepare students to think about ways to overcome shortcomings of broadcasting messages (sending them to everyone on a shared line) through the use of routing. The prompt draws parallels between routing in the mail service and routing of traffic on the Internet.

Prompt: Imagine you were going to send a letter to a friend living in another state. List the steps you imagine your letter would have to take through the different parts of the postal system. Don’t worry if you’re not sure about your answers, just make an educated guess.

Keep it High Level: The exact details matter less than identifying multiple points where the letter is sorted and rerouted based on its intended destination. No need to go into great detail here, but the hope is to help students develop a mental model for how a system for routing messages looks and what role a router serves.

Discuss: Students can share their steps with a partner or group. Combine ideas from the class to create a single model of the steps involved, perhaps by writing / drawing it on the board. Draw attention to the number of times a person, post office, etc. must make decisions about where to send the letter next, i.e. "route" the letter.

When we send messages through a network we don’t actually want everyone on the network to receive them. If we include information about who the message is intended for then we can allow portions of the network to focus on sorting and routing messages, so that they can continue on their way to their intended target. In the mail system, mail facilities, post offices, or a mail carrier fills this role.

In a network of computers, certain computers called “routers” do the same thing, directing messages towards the target computer based on the IP addresses included in the message.

Today's activity introduces the newest incarnation of the Internet Simulator

Choose a Router: Add a router if you need more space. Then join a router with a few of the people sitting closest to you. Ideally, you’ll have 3-4 classmates with you on your router.

Send a quick test message: Send a simple "hello" to a friend who is connected to the same router.

Ideally, students will recognize that:

Ask questions and direct investigations that help students encounter some of these surprising things.

Big Picture: recognize that this activity is a repeated pattern of steps:

The format of the lesson lends itself to being completed as a class, rather than individually. The activity instructions here aim to help you structure the activity so that the class can move forward as a unit and explore the functionality of the tool together.

Have a Conversation: Ask students to conduct a short conversation (e.g. a simple greeting or a question and answer) with two friends on their router. They should verbally confirm that both sides are receiving their messages. Provide students a few minutes to practice. Help students construct their messages. If their To address is not constructed properly the message will be dropped.

Read the Traffic: Once students have conducted their conversations, ask them to pause and demonstrate the ability to view router traffic in the Router tab. Students should use the data generated here to answer the first set of questions on the Activity Guide. Have students click the “Log Browser” button to view the table of router data. 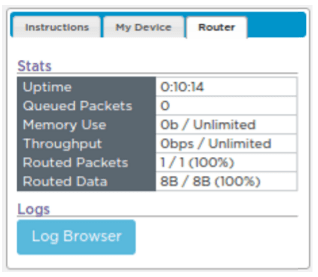 Find a Classmate on a Different Router: The Internet Simulator can route messages between routers, allowing the entire class to communicate. Ask students to find two classmates on a different router and ask for their IP addresses. (They'll need to actually talk to one another; they currently won't be able to do it on the Internet Simulator.)

Have a Conversation: Again, students should conduct a short conversation with their two partners, confirming verbally that the messages are being received. Troubleshoot errors students may be encountering as before.

Reading Network Traffic: Once students have been able to talk with classmates, direct them again towards the "Log Browser" button. It is possible to read traffic across the entire network, not merely your router by clicking the “Show all routers” button. Ask students to open the network traffic and examine the traffic in order to answer the questions listed there.

Some of the behavior for the full-class Internet can be difficult to fully comprehend the first time. It may be a good idea to join a router and send a message to another router yourself, and then as a class, trace the path it takes hopping across multiple routers. If you send multiple messages with different contents, then you can see examples of a message taking different paths to the same location.

Explaining Redundancy: The simulations students used in today's lesson model many features of the actual Internet, most notably its redundant nature (there are many paths between locations). Assist students in identifying these features with the following comments, and note that at the top of the next page you’ll find a routing table that shows the different routes taken by the messages.

On the Internet Simulator we see messages appearing in the Router Logs multiple times (like in the image to the right). This is done to simulate a message passing through multiple routers on its way to its destination. A row is created each time it shows up at a new router. 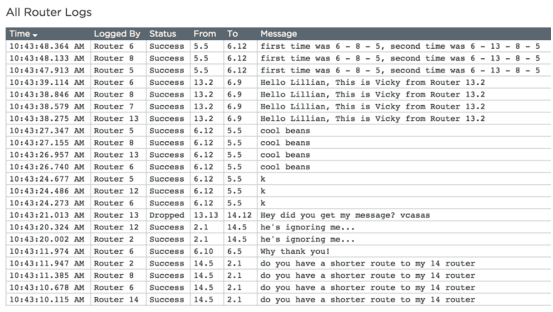 Note: In the Internet Simulator the "hops" are chosen randomly. This is done to create multiple paths. Actual routers use algorithms to determine the best path to send a message along.

Reflection: Ask students to answer the reflection questions at the bottom of this document: Routers and Redundancy - Activity Guide.

Discuss: Allow students to share their answers, either in groups or with the class. The discussion should touch on:

Code Studio: Assessment questions are available on the Code Studio.

Many changes have been made to the Internet Simulator.

Routers: Rather than being connected to your entire class you are now connected to a single router. You can see who else is on your router in the network diagram.

IP Addresses: Every user has a unique IP address. The first portion is the number of your router and the second is your own unique number. You can figure out the IP addresses of people on the router by looking at the network diagram.

Sending Messages: You can now send messages to a single other user. Fill in the "To" portion of the message with the IP address (including the period) of the person you'd like to send your message to.

Router Statistics: You can see useful information about the functioning of your router in the "Router" tab.

Router Logs: You can read a log of traffic both at the level of your router and the entire network by clicking the "Log Browser" button.

Describe the relative benefits of routing over a broadcast style of communication. Is routed traffic more secure than broadcasting? Justify your answer.

Can you know in advance the path a message will take between you and another computer on the Internet? Justify your answer.