In this lesson student develop a protocol for reliably sending a message over an unreliable internet. The Internet Simulator has been setup for this lesson to restrict messages to no more than 8 characters each, and messages get dropped messages with some probability on every hop.

Students are given time to experiment with the Internet Simulator and develop their own protocol, possibly testing or demonstrating their protocol to their peers. At the conclusion of the lesson, students watch a short video explaining how these challenges are addressed in the real world with TCP - the Transmission Control Protocol.

This is a problem-solving lesson. On the real Internet packet sizes are limited, and transmission is unreliable. In this lesson we have setup the Internet simulator to restrict packet-size to be very small - 16-bits for the to and from addresses plus only 8 ASCII characters. Also, the Simulator drops packets pretty regularly. In a set of 10 messages it's very likely one or two will be dropped. You may need to justify these restrictions to students, acknowledging that, yes, this is a simulation, but these types of constraints are a very real problem on the Internet.

The problem students have to solve is how to use the 8-ASCII-characters-worth of data to include both a piece of message you're trying to send, as well as information about how many messages (packets) there are in the whole message, and which number this packet is.

Students should invent or at least appreciate the need for something like the Transmission Control Protocol TCP. TCP was designed to overcome the inherent unreliability of the Internet. A small but non-negligible percentage of packets are lost in transmission because of faults in the infrastructure of the Internet. In order to constrain the extent of these errors, larger messages are divided into many packets which are individually routed to their recipient. The receiving computer will send an acknowledgement confirming the receipt of that packet. If the sending computer does not receive an acknowledgement, it will resend the packet until all packets have been acknowledged.

Since packets may arrive out of order, additional data must be included to indicate the order in which the packets should be arranged. Thus, while individual packets cannot be guaranteed to arrive, eventually an entire message can be accurately reconstructed.

Your friend sent you a message on the Internet, but you never received it. Based on what you already know about routers and the physical Internet, list what reasons might explain this fact.

In groups or as a class, students should share their lists. Use this opportunity to review the layers of the Internet already covered and potential flaws that could lead to a message getting dropped. Some example points of discussion:

This is an unplugged activity that was invented by teachers over a few different teacher professional development workshops for this curriculum. We've included it here because it was effective at both highlighting some of the issues around packets as well as very nicely setting up the problem students need to solve with the internet simulator.

Synopsis The activity simulates issues of packets traveling on the internet with a paper-passing activity:

When we communicate on the Internet, we are not just sending short text messages as we did yesterday. We also use the Internet to exchange documents, videos, music, and scientific data, and these files can easily grow to enormous size.

All of this would not be a problem if the Internet were perfectly reliable, but in reality, errors sometimes occur. Wires can be cut, routers can be overwhelmed with traffic, and interference with electric or radio signals can cause messages to become corrupted. The response to this problem is to split large messages into smaller pieces of information called packets.

It turns out that splitting up a message into packets provides many benefits. If a faster route opens up halfway through transmitting a large file, it is easy to reroute later packets in the transmission through that route.

Splitting up a message into smaller chunks doesn’t solve all the problems of unreliability on the Internet. Packets can still be dropped or arrive out of order.

Today’s challenge is to develop a protocol to reliably send messages even though the network itself is unreliable.

You might want to demonstrate these new features of the Internet Simulator while explaining them.

If you have the ability to project your screen you can demonstrate before having students connect by: 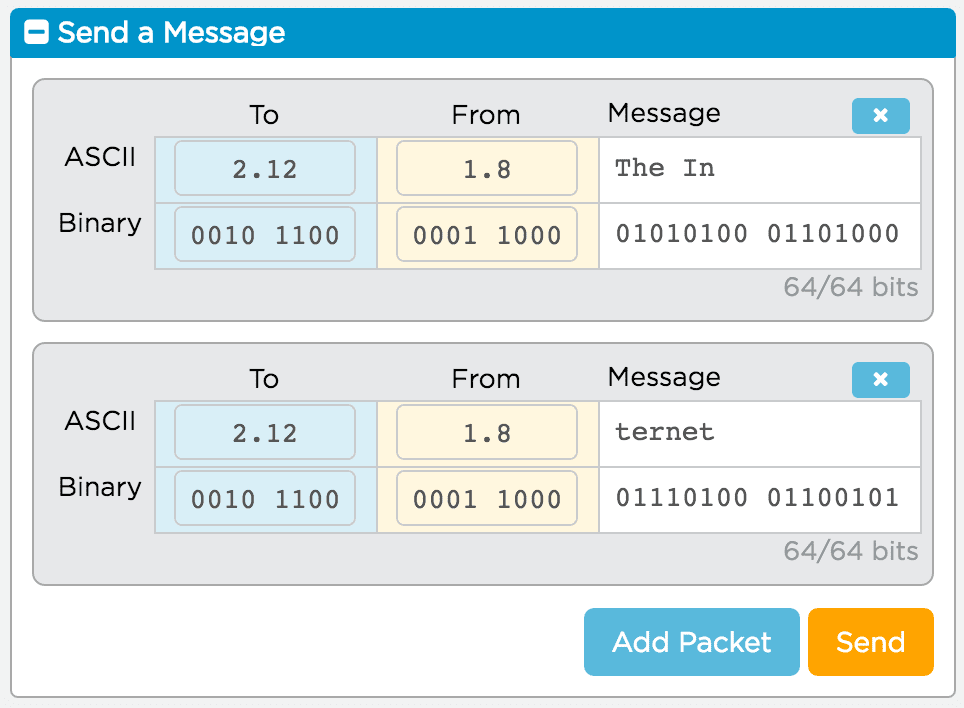 What to Look For

In student solutions, you should primarily be looking for:

This activity is designed to provide students a realistic encounter with the actual challenges of the Internet. It is OK if their solution does not perfectly match TCP, the actual solution to this problem.

Should be on the protocol for the recipient to acknowledge or re-request missing packets. That is the real challenging part, and other parts of the protocol emenate from it. See: "The REAL problem to solve" below.

To come up with a non-english message you could have students send a message as "ASCII" art. For example, you can treat the message as a grid and draw something with chacters. Here are two little examples: a letter "B" and a little character holding a torch. 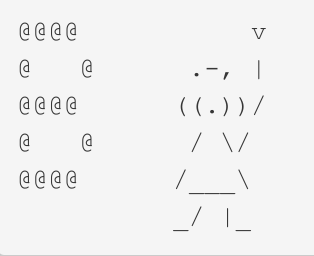 This is a clever way to send a drawing with ASCII text and students can come up with ways to break it up. The wider the drawing is, the more challenging the protocol will be to develop since each individual message is limited to only 8 characters.

If students do not immediately recognize these points, draw them out in subsequent conversations.

Sender: The simplest solution is to develop something akin to TCP, in which you use part of the message to indicate the the packet number and how many there are total. For example:

Receiver: should know how many messages there are and can request a re-send of any that are missing. For example if you received messages 1, 2 and 4. You could send a message back, something like one of these:

The way the real TCP works is this: every once in a while TCP sends back a "cumulative acknowledgement" of how many in-order packets it has received. For example, in an 8-packet message if you received packets:

This would indicate to the sender that next packet you need is packet 3. The sender would send 3, and once you got it, your next message would be:

Because you received packets 4, 5 and 6 already.

The real Problem to Solve

The real problem to solve is to think about what the recipient of the messages should do to inform the sender of what’s missing and needs to be re-sent.

It’s tricky because any message the recipient sends back to the sender also stands a chance of being dropped or lost. Your protocol needs to overcome this unreliability for both the sender or receiver.

Provide students time to work on their protocol, iteratively testing their work and recording their final protocol in the space provided in the activity guide.

We’re going to watch a short video that talks a little more about the way this protocol and others help us ensure the reliability of the Internet.

Either say these points or draw them out through discussion

Code Studio: Assessment questions are available on the Code Studio.

Packets and Making a Reliable Internet

Challenge: Develop a protocol for reliably sending a message across an unreliable network

Directions: In a group or individually join a router in the Internet Simulator and practice sending messages given these new constraints. Once you are comfortable with the challenge, iteratively design a protocol that can reliably send a message to a partner. You and your partner should join DIFFERENT routers.

Protocol Requirements: - All communication can only be done through the Internet Simulator - You must send a message that spans at least 10 packets (i.e. an 80 character ASCII message). - The protocol should account for the possibility that the characters might be entirely random (i.e. not necessarily English - do not count on human intuition to reconstruct the message. The message is not known beforehand.) - The sender and receiver must be confident the full message was successfully transmitted and reconstructed.

In your own words, what were the primary obstacles you needed to overcome in today’s challenge? How do these obstacles mirror actual problems encountered on the Internet?

(You may want to have seen the video: IP Addresses and DNS before responding to this)