Making a summary (pivot) table is often considered an advanced technique. Once you get used to it, however, it's an extremely powerful computational tool that is available in most spreadsheet software. The purpose here is to acquaint students with using such a tool and to expose this power. Also creating summary tables is a direct tie to the CSP Framework essential knowledge statement: 3.1.3C Summaries of data analyzed computationally can be effective in communicating insight and knowledge gained from digitally represented information.

The other purpose here is that creating a summary table is a good example of making a computational artifact for the Explore Performance Task. For that performance task students might find some raw data while doing research and might create a new artifact that is a summary table of the data that reveals some interesting aspect of it. Using a tool like a spreadsheet to make summary tables let's you explore data in deep ways, quickly and easily.

Being able to manipulate data is an important skill for computer scientists. Being able to create summary tables from larger datasets represents a form of computational thinking. To make a good summary table, one must have a good sense of the data, be able to hypothesize about what might be interesting to look at, and then have the skills to use a computational tool to create it. While seemingly mundane, a spreadsheet is an extremely powerful tool for working with data. Understanding the features of a spreadsheet tool, and what kinds of computations it can perform, can save you a lot of time and energy from either doing such things “by hand” or writing your own program to do it.

The need to create summary tables of raw data

As an alternative, you could show the little summary table above and ask the students:

Based on what students know so far, they should guess relatively large amounts of time (dozens of minutes, or even hours). You can then reveal that today we’ll learn how to make a table like this in roughly 10 seconds.

In the previous lesson we cleaned up the data we’ve been collecting. Now the question is: what can we do with it? Look at this table. It was created from the over 65,000 rows of data in the movie rating dataset we saw a few lessons ago….

This is an example of a summary table. A lot of work and computation went into this. Notice that this is actually new data that was computed from the raw data. This is way beyond filtering and sorting. Computing this by hand for ~65,000 ratings (or writing formulas in a spreadsheet) would be pretty painstaking.

But we can use computing tools to create summary tables like this for us in a flash. Most data manipulation tools, like spreadsheets, allow you to quickly group, categorize, count, and average things. Making a summary table is a computational technique for exploring the data; let’s try it.

Put students back together with their data cleaning partner.

As you circulate the room, keep in mind the key ideas we want students to have:

There are 3 levels in Code Studio that students go through.

Look at the levels in Code Studio for full details.

Here is a synopisis of what the students are being asked to do:

Here are the steps they go through.

Getting Started - Copy the Data

Add Rows and Values to Your Table

Add Another Field to Values

Students learn about a few more advanced features of making pivot tables and build up toward making a chart (visualization) based on a pivot table that they made, still using the movie rating data.

Here are the steps they go through:

The Next Step - Manipulating the Pivot Table

The entire lesson builds toward students being able to make a pivot table of their own data - the data they cleaned previously.

This free play should be considered optional or a bonus for this lesson.

If students have finished the tutorial they are ready to start the performance task in the next lesson.

Question: Did anyone find the potential makings of a data story today?

Note: Formally assessing the pivot tables that come from this lesson should be considered optional. These partners will be making more pivot tables and charts from them for the Practice Performance Task in the next lesson.

Which of the following statements are true about pivot tables?

Getting Started - Copy the Data

To start, make a copy of Teenage Movie Ratings Subset.csv and open it in a spreadsheet program.

We're first going to make a simple summary table that shows the average rating for every movie that's in the data.

Here is what we're going for: 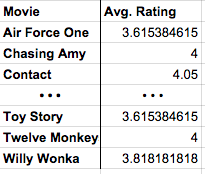 In most spreadsheet programs a Summary Table is called a pivot table.

Do This: With the spreadsheet open in Google Sheets choose Data -> Pivot table...

Add Rows and Values to Your Table

The menu on the right side of the pivot table lets you choose what you want the rows, columns, and values to be in your summary table. We want to set it up so that:

Do This: Follow the animation below to make a table that displays the average rating for every movie listed in the data set.

Setting the Rows to "movie," Values to "rating," and Summarize By to AVERAGE

The power of the pivot table is that it allows you to compute things you could never do by just filtering and sorting. The pivot table is doing a lot of computing behind the scenes for you - which is great - but you should understand what's really happening so you can make your own choices in the future. Here's a synopsis:

Change summarize by from AVERAGE to COUNT. Now, instead of computing the average rating, this will count the number of ratings for each movie.

Switching summarize by from AVERAGE to COUNT. The result shows the total number of ratings for a given movie.

Add Another Field to Values

Making a table that shows the average rating and number of ratings for every movie in the dataset.

That's It for the Basics of Pivot Tables!

There's not much more to it than that. Once you get the hang of pivot tables they can be a very powerful tool for manipulating data. There are more advanced things you can do with a pivot table if you like, but you know enough now that you can probably just play around with the other settings and see what happens.

Let's look at two more features of pivot tables that will allow you to do more complex investigations of your data.

We learned that a Row in a pivot table specifies an aggregation or grouping of items for which you want to compute a value. A Column in a pivot table is just another aggregation, but it displays the values across the top of the table. It's easier to understand when you see it...

Do This: Add columns that group your data by gender, as in the animation below.

Adding columns grouped by gender. The resulting table shows the average rating and count for each movie, but also broken down by gender. The pivot table also preserves the "Grand Totals" which is what the data would look like if no columns were specified.

Applying a filter to a pivot table does the same thing as it does in the normal spreadsheet - it allows you to filter out values from the raw data.

The animation below shows first filtering out 14-year-olds from the calculations, and then filtering out some of the movies. You don't have to do this, but in some instances it can be a very useful tool.

The Next Step - Manipulating the Pivot Table

If you want to maninpulate the data further, to sort or filter, you shouldn't do it in the live, active pivot table. Instead you should copy the table, and paste the values into a new spreadsheet.

Note: "Paste Values" is not the same as a normal "Paste".

Do This: Copy the pivot table, create a new tab in the spreadsheet and do Edit -> Paste special -> Paste values only. Watch the animation to see how.

Copying a pivot table, making a new tab in the spreadsheet, and pasting values.

"Why Paste values only instead of just Paste?"

From cleaning that up, plus some filtering we can make a chart of movies where the differences between male and female ratings are significant. 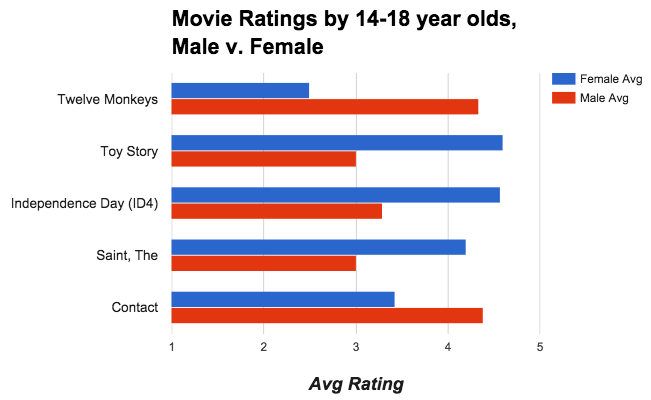 A chart showing movies with large differences in male vs. female ratings

A summary table can be a good first step toward a great visualization. You often want to summarize data first, then chart it, so you can see larger connections or patterns.

Summary tables also don't have to be small! You might make a summary table that is still too big or full of numbers to see any trends in the data.

For example, from the original movie rating data (which had roughly 65,000 records) if you make a pivot table that shows the average movie rating for every possible age group the table will be about 75 rows long with a whole bunch of decimal numbers.

You can't see any trend or pattern in the data just by looking at the table. But if you plot the results on a graph you can!

NOTE: A deeper investigation of the data shows that the number of movies rated by people at this web site declined steadily after age 28. The upward trend may be affected by the fewer number of ratings.

Now you'll get a chance to play on your own.

Now you'll make summary tables of the data you collected and cleaned!

NOTE: The task below is a kick-off to the next lesson which is a Practice Performance Task. You don't have to make a chart of the pivot table today - you'll be doing that as part of the next project - but you might experiment.

Create at least two (2) pivot tables that show different things about your data. With your partner, go back to the data you collected as a class (and which you cleaned up yesterday). Practice using pivot tables to group and calculate things you might be interested in.

There are two approaches to thinking about what kind of summary table to make:

Click "Continue" below to head to the next level.