Students learn to use random values and looping to create variation in their drawings and quickly duplicate objects they wish to appear in their digital scenes many times. Students will be presented with a version of the for loop which only enables them to change the number of times the loop runs. This block is essentially a "repeat" block and will be presented that way. Students will also be presented with blocks which enable them to choose a random number within a given range. Together these blocks enable students to create more complex backgrounds for digital scenes by randomly placing simple objects within the background of their scene. Students use these tools to step through the Under the Sea exemplar digital scene.

Loops are a relatively straightforward idea in programming - you want a certain chunk of code to run repeatedly - but it takes a little practice to get good at controlling loops and recognizing how and where in your programs to use them. The for loop in JavaScript (and many other programming languages) is designed to be used for both simple and sophisticated programming tasks, thus it has a lot of syntax to it that will be explained in the future. In this lesson, the block-based form of the for loop exposed to students is effectively a simple repeat loop - it only lets them change a number that dictates how many times the loop repeats.

Random numbers are also used more (much more) in this lesson as an effective way to experiment with loops. Creating some randomly-generated output with each iteration of the loop is good visual feedback that the loop is running the way you expect. It also helps you explore the ranges of possible outputs, which tells you more about what your program can and cannot do.

Students will have an opportunity to explore the process of creating loops by programming with them in App Lab. Use the Getting Started Activity to motivate the need in some programs to repeat commands many times, and foreshadow the fact that random inputs can be used in repeated commands to rapidly develop a variety of behaviors.

As we have developed as programmers, we have focused on the process of breaking down large tasks into smaller pieces and assigning each piece a function.

Today we’ll be exploring how a programming construct called a loop solves this problem by allowing us to repeat a set of commands many times.

We’ll also practice looping through commands many times with random input, therefore giving us many instances of random output.

Just as we saw yesterday, this will be both useful for testing our code and also for developing more variety in our drawings.

At the end of class we'll ask: "When should you use a loop instead of a function, or vice versa?"

Improving Under The Sea with Loops

When to use loops versus functions

Having used loops to repeatedly run a smaller portion of a larger program, students should attempt to formalize their understanding of when a loop should be used.

Important points to draw out are related to when to use a function v. when to use a loop. While you can get code to funciton similiarly with a function or a loop the general rule of thumb is:

Reflection: Students should briefly journal and share responses to the following question:

Once students have written their responses, have them share with a neighbor and ask a few students to share their rules with the class. Focus in particular on the reasons for using a loop.

For students’ individual renderings of the Under the Sea project, it’s recommended that you simply check for completion and that the final version students submit contains all of the required features. In the next lesson, students create their own scene from scratch, and that project has a complete rubric for a more formal assessment.

A programmer wants to write a program in which the turtle draws 8 squares in a row while moving forward. The final result should look like the turtle drawing shown at left. 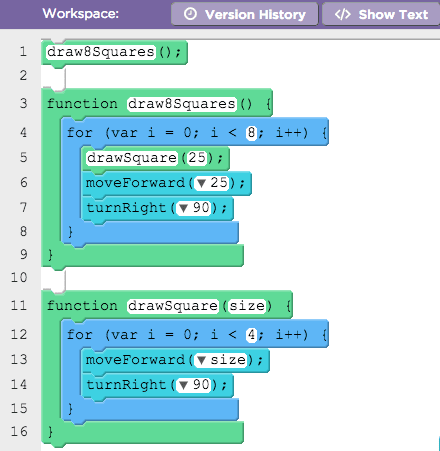 But something is wrong! The incorrect code is shown to the right. The programmer has attempted to write a function to draw a single square. Then he wrote another function that attempts to call that function 8 times. Mentally trace through the code and determine which line of code should be removed to make the program do what it's supposed to.

Students can extend their digital scene by manipulating the random values used as inputs to the different components of the scene or adding additional functions for drawing new figures. At the end of the progression, students are given a separate level in which to do so.

Getting Started with Loops

A loop is a block of code that is repeated or "looped through" in a program. You will be creating a loop using the for loop block.

We'll start by experimenting with a program similar to what you saw in the video.

Move on once you feel like you have a decent grasp of using a for loop: setting the number of times to repeat, running the program, and setting the run speed.

Let's look at the second example from the video.

Use a for loop to call a function that you wrote. We've provided the code for the drawSquare function for you.

Drag out a for loop.

Change the number of loop iterations to draw a lot of squares. Try to create the figure shown below (or something similar). HINT: the image below has 72 squares in it.

Once you've played enough to get the hang of calling a function from inside a loop then move on.

In 1-2 sentences, explain what you think the following code does.

Validation note: we don't check to see if the screen is filled. We only check that some loop is runs at least 1500 times. 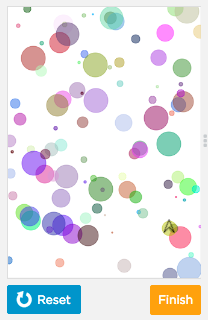 If you add some randomness to turtle behavior inside a loop, the program will run a little differently every time which can make for some cool effects.

You're about to see a program in which the turtle moves to a random location each iteration of the loop, and draws a randomly-sized dot that also has a random color. We've also made the dot semi-transparent by setting the alpha value to 0.5 (50% transparency).

Figure out how many iterations (number of times the loop runs) you need to consistently fill the screen entirely with dots so none of the background is showing. It will be a little different every time so you'll need to experiment.

Compare what you found with a neighbor to see how close your results are. Then move on.

Validation note: here's what is checked on this level --

Some repeated tasks can't easily be solved with a single loop. Instead, you'll need to use one loop after another, each one solving a part of the problem.

Add a loop to fill the screen with semi-transparent white dots until the original dots are "erased".

Drag a second loop into your code that will run after the first loop. Add commands to draw dots in random locations that are white with opacity set to 0.5. * Increase the iterations so that the colored dots are totally erased. How many does it take?

HINT: you can copy/paste the original loop and just change the color of the dots and number of iterations.

Look at this complex version of the "Under the Sea" scene you drew in the previous lesson. You now have all the skills you need to recreate this digital scene.

We will use Top-Down Design to help manage the complexity of drawing this image. The starter code you will be provided already has broken the problem into multiple levels.

You are about to see that we've provided you with a good amount of starting code. Here's a brief tour:

High-Level Function Calls: These read almost like a story of how you will draw the image. There's one function for every major component of the scene. 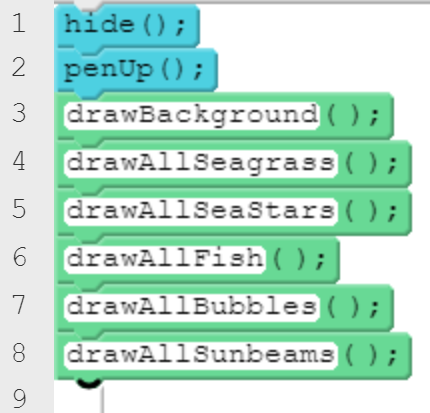 High-Level Function Definitions: These currently draw a single copy of each component. You will add code to these functions to draw many copies of each component in a variety of sizes and colors.

Low-Level Functions: These draw single elements of the scene. Most have been written for you already, but we've left a few for you to complete as well.

The first high-level function you will write is drawAllBubbles. You may have noticed that the bubbles in the image look very similar to the dots example we've already drawn in this lesson. Now we'll use that skill to add to our image.

The next high-level function you will write is drawAllFish. A version of drawFish with parameters has been provided for you to use.

We do not check whether drawSeaStar uses a loop as part 1 of the instructions indicate. 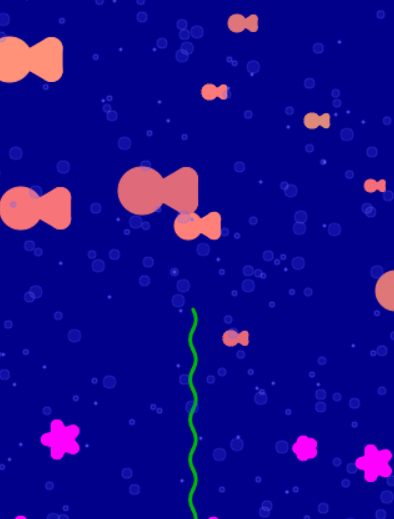 This time you will modify one of the lower-level functions - drawSeagrass. Notice that the current version of drawSeagrass actually uses a loop. We want to modify this function so that we control the number of times it loops with a parameter.

Our new version of drawSeagrass now draws a single piece of seagrass with a random height. Now let's use a loop in drawAllSeagrass to fill the sea floor with it.

Finally, we'll add some visual flourish by writing drawAllSunbeams. Note: The turnTo command makes the turtle face a random direction prior to drawing each sun beam.

Validation Note: We have turned off most validation here to allow for free play. We check that the code isn't blank, but only the following:

Mess around with your "Under the Sea" scene to make it do different things.

Ideas: Make different amounts of each component. Play with the ranges of random values. Add other creatures. Play with color values to give the scene a different feel (nighttime? red dawn?). * Get creative!

One component of the AP Create Performance Task is selecting an abstraction that you developed.

Here's the scoring guide for this question

The program code below is from a program a student developed.

Write which of the rectangles (A, B, C, or D) is placed around a student-developed abstraction.

Then explain your answer using the criteria in the scoring guide.

A programmer wants to write a program in which the turtle draws 8 squares in a row while moving forward. The final result should look like this:

But something is wrong! The incorrect code is shown below. The programmer has attempted to write a function to draw a single square. Then he wrote another function that attempts to call that function 8 times.

Mentally trace through the code and determine which line of code should be removed to make the program do what it's supposed to. 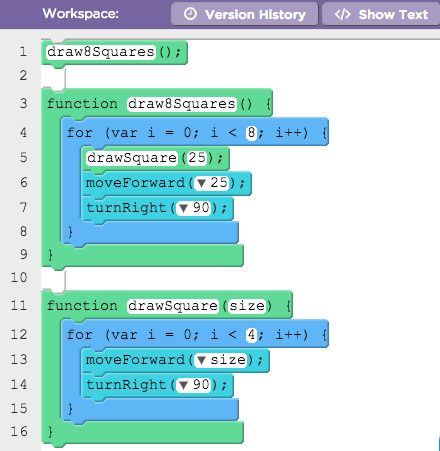 There is no hard-and-fast rule as to which is better, but what do you think? What kinds of circumstances would lead you to writing a function versus using a loop?

Describe, using a top-down approach, how you would create a program to draw a white snowflake on a blue background that uses random numbers, so the snowflake will be unique every time you run the code.