Even though many people use the internet daily, not very many know how it works. In this lesson, students will pretend to flow through the internet, all the while learning about connections, URLs, IP Addresses, and the DNS.

If you have been doing every lesson in this course, then each student in your classroom has used the internet...but how many know how it works? Learning more about the internet will help students develop a better understanding of its endless possibilities.

This lesson has several new and important words:

The service that translates URLs to IP addresses

An easy-to-remember address for calling a web page (like www.code.org)

Computers that exist only to provide things to others

A quick preview is all you need here. These words will all be explained as part of the lesson, so it would be far less confusing to do a brief intro to the words as a "see if you can spot these during the day" type of heads-up.

A connection that uses light to transmit information

A method of sending information using telephone or television cables

There are some great YouTube videos on this subject that can make this lesson a little easier to understand. You can show them to the class in advance, or just watch them yourself. Here is one of the videos in the Code.org video series on "How the Internet Works". (We recommend watching from 1:44 - 5:13, if possible.) The rest of the playlist is available here.

Every message we send through the internet gets chopped up and each piece is wrapped in its own version of an envelope. We call those "packets." Packets are specially formed chunks of information that are able to easily flow through any of the internet's channels.

Sometimes, a few of those packets will get lost, because the internet is a crazy place. In that case, the packets need to be resent, and the whole message has to get put on hold until they arrive.

Where do you think those packets are headed?

Servers don't have names like you and I do. They're actually addressed using numbers. These numbers are called IP addresses, and they look a little strange.

There are many ways to reach the internet from your house, school, or place of business.

Direct connections are most reliable, but they can be inconvenient.

Wi-Fi connections are super convenient, but the aren't always reliable.

If you're thinking that this is a lot of text and it would be extremely boring to try to lecture this to a class full of elementary school kids, you're absolutely right! If you're unable to show a YouTube video in class to help explain it all, I highly recommend drawing pictures to explain each idea above, or choosing students as volunteers to act out what you describe while you're explaining. They're not expected to get every detail and definition at this point, only to gain exposure.

So, if you're used to sending information to URLs (like www.code.org) and the servers actually have IP addresses for names (like 54.243.71.82) how does the Internet change from one to the other? That's what the DNS is for. The DNS (Domain Name Server) has tables that allow the system to go back and forth between URLs and IP addresses. If the Domain Name Servers ever stopped working, it would shut down the internet as we know it!

With that said, let's try to understand what the DNS does by making a little DNS table ourselves.

Pull out a piece of paper and draw a grid similar to that in the internet activity:

First, we need to fill in this table.

Now let's take this DNS Table and pretend to send messages through the internet!

If it feels like there are too many rules to explain outright, feel free to post them on the board and just explain the game as you go. You can play multiple rounds until the class really understands.

To play this game, you can have your groups cluster anywhere, but for the first time it can be less confusing to have groups play in a line. 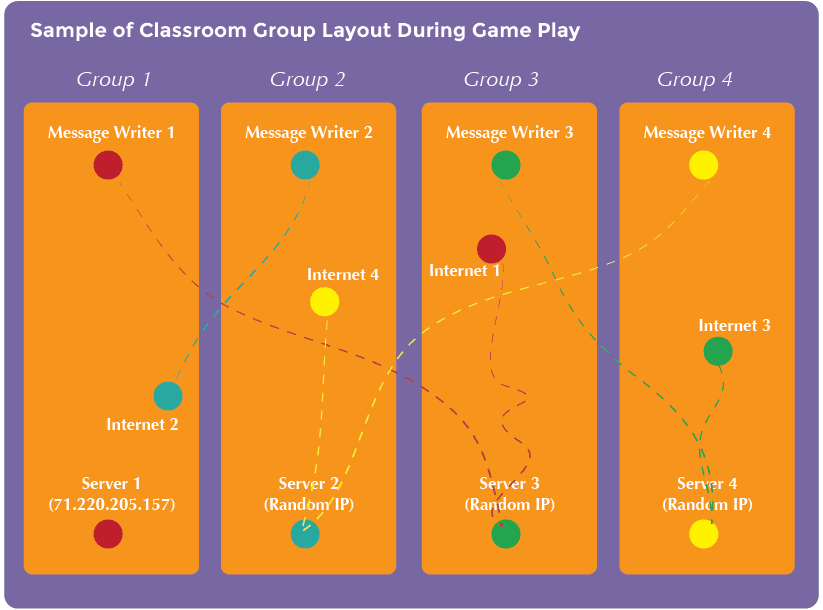 Flash Chat: What did we learn?

Flash Chat questions are intended to spark big-picture thinking about how the lesson relates to the greater world and the students' greater future. Use your knowledge of your classroom to decide if you want to discuss these as a class, in groups, or with an elbow partner.

Having students write about what they learned, why it’s useful, and how they feel about it can help solidify any knowledge they obtained today and build a review sheet for them to look to in the future.

Hand out the assessment worksheet and allow students to complete the activity independently after the instructions have been well explained. This should feel familiar, thanks to the previous activities.